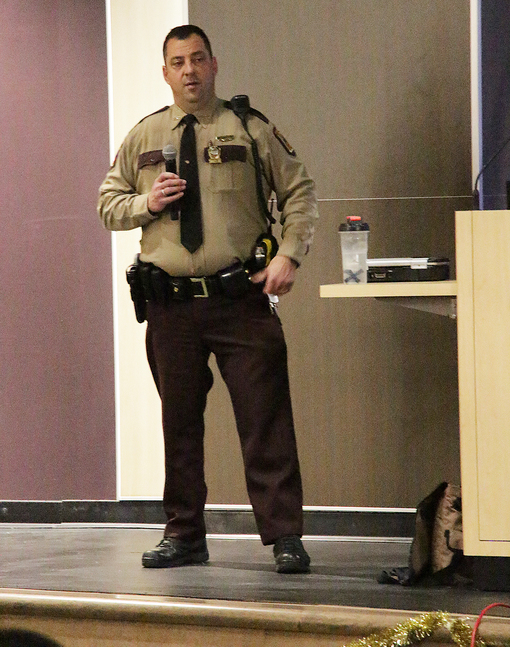 While the importance of using seat belts while driving is well documented, Delano High School students in grades 10-12 received a powerful reminder from the Minnesota State Patrol on Wednesday, Jan. 8.

Trooper Kevin Brisk visited the school to present a video, “Lasting Impact,” that the state patrol produced in the aftermath of a crash that killed an 18-year-old Triton student in 2015.

“It’s our goal to get out to all the high schools in the state of Minnesota to show this video,” said Brisk at the start of the presentation.

Students were told prior to the screening that if the video struck too close to home they were welcome to leave the room or speak with school counselors or social workers who were on hand.

The video featured interviews with family members, friends and Triton school officials, as well as photos of the damaged vehicle and the funeral of crash victim Logan Maas.

In the incident, Maas and three friends were driving over the crest of a rural hill at high speed to create a roller-coaster sensation. On a third and final pass, the three passengers decided to take their seatbelts off before the driver lost control and all three passengers were ejected.

“I turned around to check on everybody, and there was nobody in the car with me,” the teen driver said in the video.

Maas’ father said his son’s death was entirely preventable because Logan, a member of the fire department’s explorer program, had witnessed first-hand the importance of seat belt use and certainly knew better than to ride in a vehicle without one.

“It takes one second for your entire life to change, and once that second is done you can’t go back,” the driver said in the video. “I don’t think you can go through something like that and not have it follow you the rest of your life.”

Following the screening, Brisk answered a few questions from students and presented information and statistics regarding motor vehicle safety. He said the primary challenges facing teen drivers include inexperience, distractions, speeding and a propensity to take risks. He also encouraged drivers to take responsibility for their passengers.

“The driver should not start the vehicle until everyone is buckled,” Brisk said, noting that proper seat belt use can reduce the risk of fatal injuries to front-seat passengers by 45 percent. “Wearing a seat belt is the easiest thing you can do to prevent being injured or killed.”

Brisk also said that drivers under age 21 can lose their license if any amount of alcohol is detected in their system while they are behind the wheel, and clarified laws regarding cell phone use in a vehicle.

DHS Principal Dr. Steve Heil said that Delano’s location on the Highway 12 corridor, and the regular challenges associated with winter driving in Minnesota, made the presentation an important message for students.

“A seat belt is something so simple, yet so effective in preventing serious injury or death,” he said. “I hope this presentation provides for some conversation between parents and children, and the greater community, on the importance of seat belt wearing and being safe behind the wheel. Logan’s father is correct ‒ these types of tragedies can be prevented.”