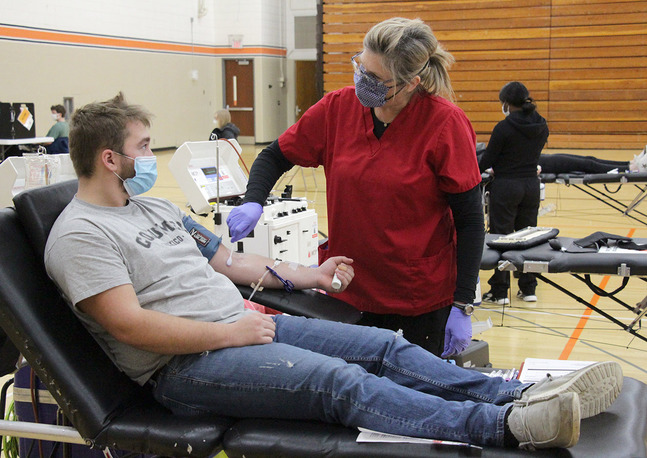 Although Wednesdays have been distance learning days for Delano High School students and staff since the school year began, the annual National Honor Society blood drive generated its typical activity on Feb. 10.

A total of 93 students and staff members signed up to donate, meeting the Red Cross goal for the event.

“We were a little worried about no-shows since there is no school here today,” said senior Weston Russek, who organized the event along with fellow senior Gretchen Barta and juniors Nicholas Black and Amber Peterson. “Usually they can just walk down from class, but we didn’t have too many not show up. There were a few deferrals, but that’s always expected. Overall, it turned out well.”

Barta said the outcome was well worth the time students invested in recruiting participants and working the event.

“It’s just cool to see people come through to help others,” Barta said, explaining that the drive was open to students and school staff members alike. “There are times when people need blood and there are blood shortages, so it’s nice to see that we’re actually making an impact in helping people who need it.”

Russek said that as far as NHS activities go, the blood drive is fairly unique in its all-encompassing nature.

“A lot of independent service projects for NHS are fairly closed, but I like the openness of this one – how we can get the whole school involved in our project,” he said.

COVID adjustments
Although donors had their temperature taken before giving blood, and the Red Cross will test all donations for COVID antibodies, Barta said there weren’t too many other changes necessitated by the virus.

“Normally we do donuts before you donate, and we couldn’t do that. I think just getting people to sign up was a little bit trickier, because we don’t see everyone in school (due to the high school’s hybrid schedule),” she said. “We still reached the goal, but it was harder because of the split days. It took a lot of communication. But the drive itself was mainly the same, you obviously just had to wear a mask.”

Donor experience
Because many high school students are just reaching the age when they are allowed to give blood, one gratifying aspect of the drive for student organizers was seeing how many newcomers there were.

“I’d say a majority of students who donate are first-time donors. Hopefully they’ll come back the next year and keep donating throughout their life,” said Russek.

One of those rookie donors was sophomore Hailey Ness.

“I wanted to try it because I thought it would be different and a nice thing to do,” she said. “It was fine. Right away afterward I didn’t feel good, but I was expecting that. I would definitely do it again.”

Another new donor, junior Katie Wegman, said she didn’t have any nerves about the process ahead of time. Why did she take the initiative to come to the school and give?

“To help other people,” she said.

On the other hand, senior Reed Schmidt was no stranger to the experience, having given twice before.

“It’s just a good thing to do, and I don’t mind it,” he said. “Some people don’t handle blood well, but I don’t have a problem with it, so I might as well do it while I’m young.”

“The Red Cross is really good at setup and handling it. We just get the people moving through,” she said. “I think it went smoothly.”

“Thanks to everyone who came out to donate,” said Russek. “And remember to come again next year.”