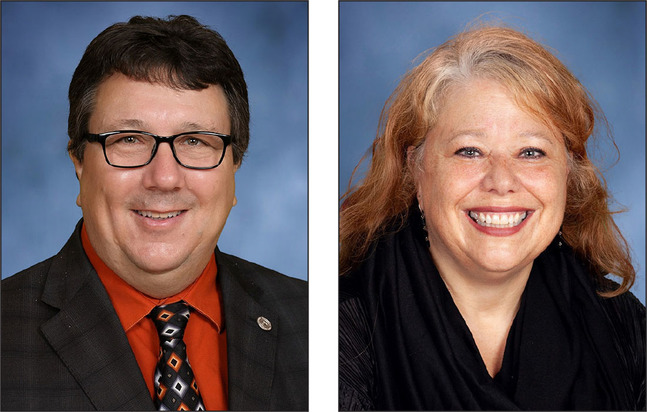 In addition to important roles in the classroom and at the administrative level, Joe and Karla Vieau have been among Delano students’ biggest fans.

This summer, the couple retired after more than 20 years of service to the district.

“It’s been a pleasure to be here, to serve our community and our kids and our staff,” said Joe. “We have had an awful lot of laughs. Some crying too. I wouldn’t trade it for the world.”

Hometown connection
Joe Vieau has seen every level of the district, from growing up in Delano as a student-athlete to returning as a math teacher, then moving into curriculum development and administration.

He and Karla, a native of Jordan, met at Bemidji State University and married while in college. At the time Joe was a math major. He eventually changed to math education through the influence of Karla ‒ who knew she wanted to be a teacher from childhood ‒ and to follow in the footsteps of Jon Warta, one of his favorite math teachers at Delano High School.

Joe secured his first teaching job at Dawson-Boyd in western Minnesota in 1987, and soon added coaching responsibilities for the JV basketball, JV volleyball and JV and junior high baseball teams.

In the meantime, Karla worked as a substitute teacher and raised their two children.

“When they were young I wanted to be home with them,” said Karla. “I was very happy as a sub. When my kids had parties or this or that, I didn’t miss anything. So I got the best of both worlds.”

Returning to Delano
After 11 years in Dawson-Boyd the Vieaus were ready to move closer to their families. In 1998 Karla got a job in Delano as an intervention teacher at the elementary school, and Joe joined his old mentor in the high school math department the following year.

“It’s a different sensation coming back and calling your former teachers by their first names,” Joe said. “It was also strange having my cousins in my classroom, and having aunts and uncles come to conferences for them. It was all good ˗ just kind of a strange feeling.”

Had returning to Delano always been part of the plan? Joe said that Delano has a traditionally close relationship with its alumni, and that drew him even though he also had another job possibility in Chaska at the time. After listing half a dozen other Delano grads who have returned as staff members, Joe said there is a common theme.

“It says something about the wonderful experience we had here as students,” he said. “These are good people who have come through the system and want to come back and give back.”

For her part, Karla found deeply fulfilling work as an elementary interventionist for the remainder of her career, providing various support programs for the younger students.

“At first I really wanted my own classroom, but I truly believe this is where God wanted me because that’s where my strengths were, working one-on-one with those kids and making kids who didn’t always feel successful, feel successful,” Karla said. “I let my kids know every day that they are loved and they are smart and they’re good and they’re going to be successful.”

Moving to administration
Four years after Joe returned to teach in Delano, budget cuts resulted in the elimination of an assistant principal and the curriculum director position at the high school. Joe was asked to take on both roles and agreed, even though he was already committed to teaching a College in the Schools calculus course in the upcoming year.

“So the first year I was an assistant principal and curriculum director, I was also teaching a CIS course that I had never taught before,” he said with a laugh.

“It was crazy,” said Karla.

In many districts the assistant principal and curriculum coordinator positions are separate, full-time jobs, so how did Joe manage the roles?
“Basically the balance was doing the AP job during the week and the curriculum job on the weekend,” he said.

In addition to their official duties, the Vieaus were ubiquitous at other events and activities. Joe served as the public address announcer for football, soccer and basketball, and emceed a host of other events including the prom grand march, graduation, NHS induction ceremonies and Dollars for Scholars.

“When Joe was doing basketball I was doing the clock. Those were our date nights,” said Karla, who also kept basketball stats and volunteered in supervisory capacities for numerous events.

As if their calendar wasn’t full enough, Joe stayed active as a coach of the math team, and even taught a remedial math class at Rasmussen College for a number of years. It added up to a frenetic schedule, but allowed the couple to maintain relationships with students in various capacities over years of time.

“That is the reason that we did so many other things, because that allowed me to interact with all of the kids,” said Joe. “I wanted to keep interacting with kids in a positive light. I wanted to interact with kids in a way they didn’t see as much in my assistant principal role. Those opportunities allowed me to know basically every kid in the high school for 13 years.”

In 2016 Joe became the district’s full-time director of teaching and learning, a position that focused on curriculum and staff development. He continued in that role until the 2020-21 school year when he stepped in to fill a vacancy as the interim Delano Intermediate School principal.

“That was a career highlight, but just as much or more so than that, we were chosen as a national model school in 2007 and 2012,” said Joe. “So we presented and told why Delano is an awesome place to be. Career-wise, those were unbelievably rewarding experiences.”

Joe and then-DHS Principal Dr. Bruce Locklear spoke in Washington, D.C., and Orlando, Florida, for the National Model School recognition program put on by the International Center for Leadership in Education. The duo also spoke about Delano for other functions in Louisiana and Michigan.

Locklear, now the director of New Life Academy in Woodbury, said Joe was an integral part of the school’s success, and called him “a great friend and colleague, and above all a man of integrity.”

“We were so blessed to work with a great faculty and staff and really help put Delano High School on a national stage for innovation and performance,” Locklear said. “Joe was at the center of all this.  He was committed to making Delano a great place for our families and a top performing high school where student were truly prepared for whatever future they chose.”

Karla was also esteemed by her peers in Delano, and received Leadership in Educational Excellence honors in both 2009 and 2019.
A staff nomination for her 2019 award hailed her “unwavering belief that all students, especially those with the greatest challenges, deserve the opportunity to reach their potential.”

Karla also had a knack for spurring on those around her.

“She inspires me and others to strive for rigor, relevance, and relationships,” said another nomination for her 2019 LEEA honor. “Former students hug her 10 years later because they know that she believed in them.”

Challenges
In terms of adversity over the years, the couple agreed that nothing topped the onset of COVID-19 in 2020 and 2021.

“When you’re in leadership or quasi-leadership roles, there is no way to satisfy 100 percent of the people all the time. That just kind of goes with the territory,” said Joe. “This last year has presented so many unbelievable changes and required so much flexibility in such a short period of time. Everybody was affected, from parents to students to teachers to custodians to cooks - absolutely everybody had to make severe adjustments.”

“We were just trying to give grace all the time,” said Karla, who took a leave of absence during the COVID period.

Retirement plans
With such busy schedules for most of their careers, the Vieaus will have an adjustment to make in retirement. What comes next?

“I’m kind of scratching my head,” said Joe with a laugh.

Karla had a bit more clarity.

“The plan is grandkids,” she said. “We had our kids, and then we didn’t really have the empty nesting time because we were still so involved in school. Our kids would call and say, ‘Wait a minute. Why are you never home?’ Now the grandkids start, so we have a new generation. And they do keep us young, keep us running.”

For both Joe and Karla, that focus will be a natural progression given their efforts on behalf of the community’s children over the last few decades. Both agreed that their personal and professional time could not have been better spent.

“They’re the reason. They’re at the center of it all,” said Karla. “Delano kids are amazing.”