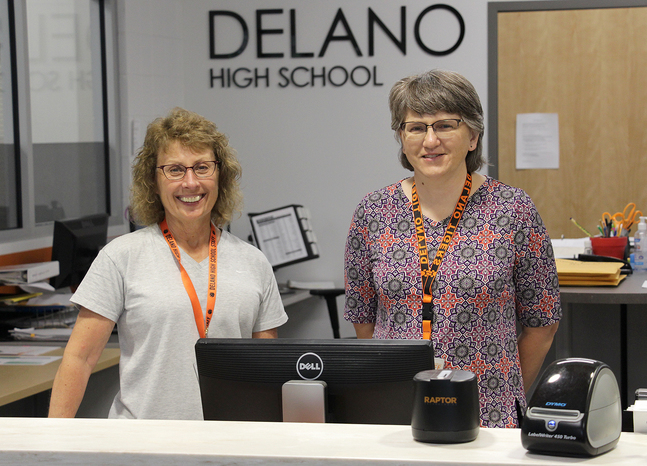 In ways both salient and subtle, administrative assistants Dolly Hedtke and Marie Thomas kept the academic world going ’round at Delano High School over the past number of years.

With both retiring this summer, co-workers said their contributions to the school could not be overstated.

“As we all know, our administrative assistants run this school,” Assistant Principal Shane Baughman said at a year-end district-wide staff meeting. “The title administrative assistant does not do Dolly and Marie justice; they are educators. Each plays a critical role in the success of our building and in positively impacting our students, families, and our Delano staff.”

Thomas joined the district in 2005, and Hedtke was hired in 2014. Former DHS Principal Steve Heil, who left Delano after eight years last summer to become the superintendent of St. James Public Schools, said Thomas and Hedtke were “vital” to school operations, and wonderful individuals to have representing the school in the front office.

“They’re missed by me now, and they’re going to be missed by the entire school community there,” he said. “They are two amazing people, and I wish them well in retirement.”

Marie Thomas
Following a career in television broadcasting as a producer and director ‒ a career that spanned Wisconsin, Minnesota and Kansas ‒ Thomas and her family settled in Delano over Christmas break during the 2004-05 school year.

“We decided that Delano had good schools, so this is where we wanted to come back to,” Thomas said, adding that her family had previously lived in the Chanhassen area.

Looking to shift away from a career with long and often irregular hours, Thomas put her name on the substitute paraprofessional list at Delano Elementary where her two sons attended school. Toward the end of that school year she saw a posting for a high school administrative assistant, applied, and earned the job. Having worked as an after-school program coordinator at an elementary school in Wisconsin, and with college students in Kansas, Thomas said she enjoyed the age of high school students in Delano.

“It’s fun to watch them come in as a freshman, and they’re these little kids. And then, holy moly, they grow and they’re big and they can carry a conversation with you,” she said. “That’s in just four years. They’ll always remember those four years. They probably won’t remember me, but it’s nice to be a piece of those memorable years for them.”

Heil said Thomas was an ideal person to welcome students and visitors to the high school office. On top of myriad duties that included tracking attendance and making morning announcements, Thomas had a knack for making everyone who passed through the office feel valued.

“She was amazing in the fact that, whether it was an athletic or academic activity, she knew what the kids had accomplished and would always congratulate them and congratulate their parents,” he said.

Thomas said the biggest changes during her 16 years came recently, as the school underwent a multi-year renovation that involved several temporary office relocations. At the same time, the school converted from a 9-12 to a 7-12 building.

“Uffda. That was intense,” she said with a laugh. “We had to be very flexible and we had to go wherever the best place was (for our office). When we finally moved into our new area, that was fun. That was exciting. That was nice.”

A personal highlight for Thomas was the way the high school staff supported her during a bout with cancer about 10 years ago.

“It was so nice to have that love and support from all of them. I don’t know if they realize how much it meant to me,” she said. “The teachers are a good family and they look out for each other.”

Dolly Hedtke
Like Thomas, Hedtke began her Delano schools career as a substitute paraprofessional. She worked in all three buildings, eventually began subbing in the high school office as well, and finally took on a full-time administrative assistant role.
What did she enjoy most about the job?

“It’s an exciting, ever-changing environment to work in,” said Hedtke. “Change seems to be the name of the game. Change is hard, but it’s also challenging. It’s never boring or mundane.”

It didn’t take long for Hedtke to earn a reputation as someone who was uniquely well-suited to the record-keeping duties that came with her position.

“She is probably one of the quietest, hardest-working people at the high school, and has one of the finest eyes for detail that I’ve ever met in my career,” said Heil. “She’s an amazing person who can pick out the one little mistake in thousands of pieces of data. She can find it and correct it, and not take forever doing it.”

Heil added that most people don’t realize the amount or the importance of the work Hedtke did behind the scenes in maintaining student records, grade point averages, report cards, transcripts, etc., and Baughman agreed.

“Ceremonies such as Senior Award Night and graduation happen because of her,” Baughman said. “Furthermore, she diligently tracks students’ progress for the entire school so that we may intervene and support our kids as a team. This has led to students who may not have graduated on time [getting] to walk across the stage with their classmates.”

For her part, Hedtke said some of the biggest highlights of her time in the high school office included adversity and a collective effort to address it.

“The best things I’ve seen are when students are able to overcome obstacles and succeed in what they’re doing,” she said. “And along with that, seeing how much time and effort the teachers put into helping the students. Overall, everybody works together to get things done and help students. When there are changes or problems, everybody just works together to figure out how to solve it.”

Retirement plans
With three daughters living out of state, Hedtke said her primary retirement plans are to travel, spend time with family and enjoy a new role as a grandparent.

“It’s going to be different, but I’m looking forward to it,” she said.

Thomas plans on moving back to Wisconsin, where her husband has inherited a family farm dating back to the 1800s. They will build a new home, take down old buildings that have deteriorated, rent out the tillable land, and enjoy the woods.

“It sounds like work, but we go out there and we feel very at peace,” she said. “For us to be on that land with all that history, it’s very meaningful. And we want to winter somewhere warm. Portugal is on our list. Maybe Florida or Arizona. We want to go somewhere different each year.”

Thomas’ absence will be immediately noticeable next fall when a different voice makes the morning announcements, but she said she is prepared for a new chapter.

“I’m going to miss it. It will be a somewhat hard transition, but I’m ready for it, so it will be good,” she said. “I’ve enjoyed my time and the people I’ve worked with. I have no regrets, and lots of good memories.”

“Dolly and Marie have always been the consummate professionals and team,” Baughman said at the year-end staff meeting. “They both made each other better and the whole office functioned as a well-oiled, efficient machine. More than that, they are caring people, each of them paying attention to the small, everyday details that make people feel like they mattered. These two have done a phenomenal job serving the Delano’s students and staff. I speak for everyone when I say we are truly going to miss each of [them].”