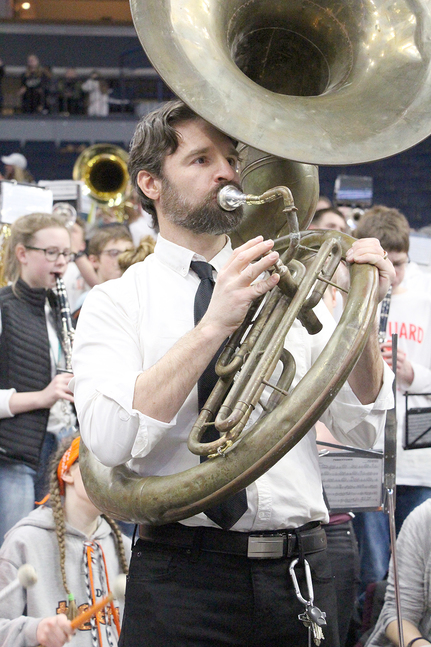 Pursing his passion for music has led Jason Koets to a career that perfectly harmonizes his interests and aptitudes.

In recognition of the Delano High School band director’s outstanding work with students, his fellow faculty members have named Koets the Delano Public Schools 2019-20 Teacher of the Year.

A nomination statement from a fellow teacher praised Koets for building a strong band program in the high school.

“His dedication and enthusiasm shines through preparing his students to be all things musical,” the nomination said. “His tireless service, transforming unmitigated noise into melodically synched musical notes, speaks volumes of his teacher craft and dedication.”

Koets said he greatly appreciates the respect of his peers across the district, but that the honor is ultimately a reflection on his pupils and the other teachers who have given them the skills needed to succeed as musicians.

“Winning this award lets me know that there are people who see what I’m doing and what the music department is doing, which feels good,” Koets said. “But I can’t take all the credit for what the students are doing, because there are teachers out there who taught kids how to count and deal with fractions, and other music teachers who taught them to read the rhythms and the pitches and all the things we deal with in music. There are speech pathologists who have worked with some kids so they can make the proper ‘T’ sound in their instruments. So it’s really a collaborative effort here.”

Choosing music
After 22 years as a band director, including the last 15 in Delano where Koets has taught students from fifth grade through 12th grade, it might be difficult to imagine him doing anything else. But teaching was not part of Koets’ original plan.

After his 1991 graduation from high school in Pipestone, where he played the tuba and was a three-sport athlete in football, wrestling and tennis, Koets set course for Bemidji State University and its industrial tech program.

Midway through his sophomore year of college, however, it became clear to Koets that he needed to change directions.

“Music was just my thing,” he said. “I realized that I wasn’t in the shop room as much as I should have been. Instead, I was performing with all these small ensembles and with the band in the music department. That’s when I sort of realized it was a switch I needed to make.”

It wasn’t an easy transition – “of course there weren’t any classes or credits that really transferred from one program to the other,” Koets said with a laugh – but he persevered and graduated in 1997.

Becoming a teacher
Once Koets decided to pursue a career in music, the choice to become a teacher was natural.

“Going through all my musical training, I really looked up to my teachers. If you’re an athlete you might look up to a particular athlete and how they perform, but for me, it wasn’t like I was aspiring to be like a certain tuba player. I was looking at my professors and thinking, ‘I would like to be like them.’ They were giving the joy of music to students.”
Familiarity with the teaching profession through various family members also helped, and Koets narrowed down the age groups he would like to instruct after student teaching in Marshall High School and as a long-term substitute for the elementary there.

“I worked with the elementary kids and realized, ‘Nope, that’s too much energy for me,’” Koets said with a laugh. “That’s a whole different animal and I really respect the teachers who teach kindergarten and first grade.”

He taught for seven years in Rocori before coming to Delano, which has been his professional home since 2005. Why has he stayed?

“We just have a different type of student, consistently, year after year,” Koets said. “They are super smart kids. And there is a really high quality staff here. Every teacher we hire is a quality teacher.”

Favorite aspects of the job
Unlike most other staff members, music teachers get to see students year-round.

“It’s a really unique position, in any school, to be a band director,” said Koets. “I get to see the students every single day, all year. It’s really interesting watching them develop as people. And you develop some strong relationships with some of the students too.”

“I really enjoyed teaching the fifth-graders because a lot of it was new information to them,” Koets said. “That was the year they learned the most.”

An annual highlight came around the middle of October when the young musicians honked and squeaked their way through “Hot Crossed Buns” for the first time.

“That’s the first recognizable piece of music. Every year when we’d finish that song the kids would cheer and stand up and high-five each other and just be super excited because they made music,” Koets said. “That’s the best part.”

Teaching philosophy
Over the years Koets has honed his teaching approach to emphasize skills in his students that apply to studying for other subjects, and will eventually translate to the workplace.

“The process matters more than the product,” he said. “I decided that I needed to teach students not just about music, but about practice and the process of learning. That’s really where what I do in the classroom means just as much as what students do in math or English or science or any of the other subjects that are tested.”

Since music is not tested by the state in the same way other subjects are, how does Koets articulate the value of a musical education?

“Not to put it just in musical terms, but broaden it out to humanities – those STEM subjects aren’t teaching us about ourselves as humans,” Koets said. “You have to have those humanities classes. Not every student is going to be reached in the same way. Some might be reached through the literary arts. Some might be reached through the industrial arts, or FACS. It’s about finding out who you are, what your likes are, what your emotions mean, how you fit into humanity.”

The bottom line is that not everything that is valuable is easily quantified in test scores and proficiency graphs.

“I can tell you that there are students who are better off in life because they are taking music classes or theater or whatever it might be,” Koets said. “I don’t necessarily have data to prove it, but we all know that’s the case.”

Outside of school
When not on the podium with a baton in his hand, Koets can be found playing tuba for the Buffalo Community Orchestra, trombone for the West Metro Jazz Band, or with various other ensembles that meet less regularly.

He lives in Watertown with his wife Penny, a music teacher at Annandale Elementary School, and their two children. Cole (10th grade) and Kiersten (eighth grade) are both students at Delano High School.

* Koets is now a candidate for Minnesota Teacher of the Year, along with 133 other teachers from around the state who have accepted their nominations and completed the required documents. The statewide finalist will be announced on May 3.