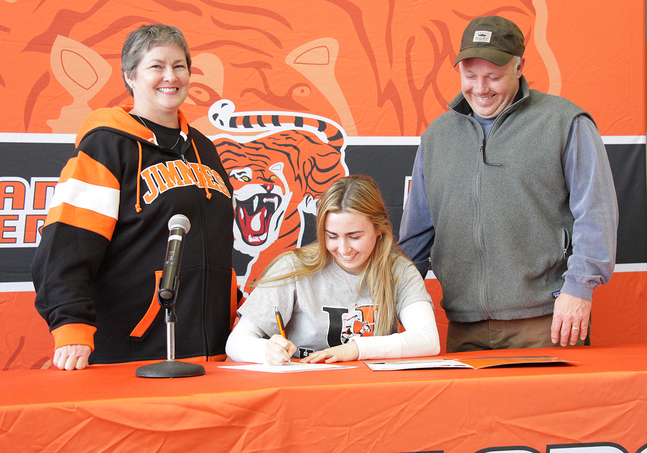 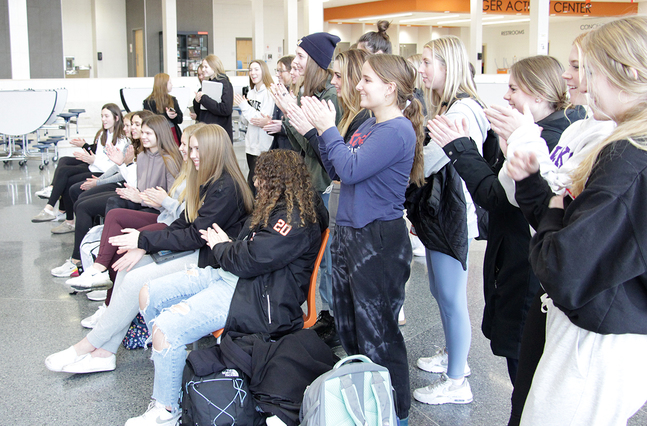 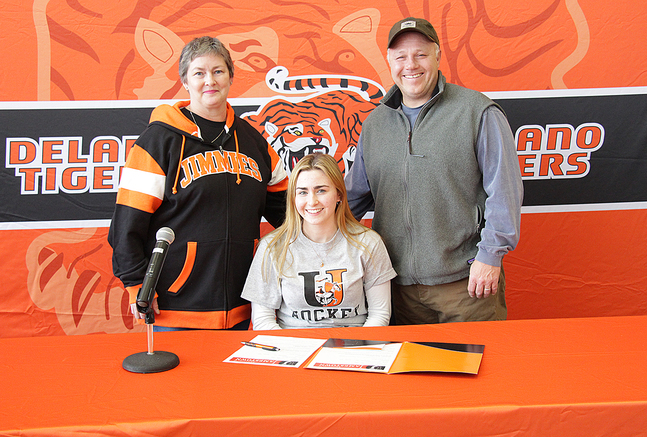 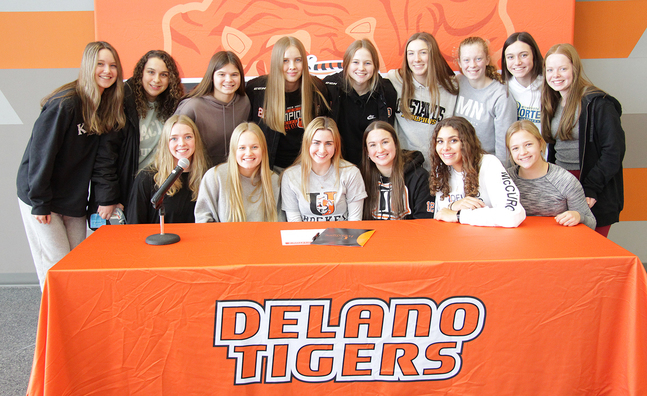 Delano High School senior Ashley Johnson became just the second Tiger in the history of the girls hockey program to sign with a Division I college on Tuesday, Dec. 14.

Johnson, a standout defender, inked her name on a letter of intent to play for the University of Jamestown in its inaugural season next winter.

“This is big for Delano High School, and certainly for girls hockey here,” said Delano Activities Administrator Ryan Tool during a brief signing ceremony. Tool added that while about 7% of high school athletes go on to play at some level in college, only 2% play at the Division I level.

Josh Lunderby, the varsity assistant coach for Delano, spoke during the ceremony and said that Johnson is “an amazing leader” who is “a great extension of our coaching staff.”

“Ash is a team-first player. She is one of those kids who will put aside personal goals and individual issues to make sure that everything for the team is taken care of, whether it’s on the ice or off the ice,” he said. “She is one of those players who always goes above and beyond.”

On the ice, Johnson’s skating ability is a defining trait, and her hockey IQ amplifies her physical abilities.

“She’s super fast, forward and backward, and she’s smart,” said Lunderby. “In my opinion, that’s her greatest attribute. She knows when to make smart plays, whether it’s dumping the puck or taking a shot on net or playing the body. That’s what sets her apart.”

Johnson thanked her teammates and friends who attended the signing ceremony, as well as her past and present coaches.

“You guys have been a really big part of why I enjoy playing and want to keep playing,” she said.

After the ceremony, Johnson explained that she had skated for some time before starting to play hockey in first or second grade.

“It’s been kind of a lifestyle ever since,” she said.

How did she develop into a Division I-caliber player?

“Obviously the skills are a lot to learn, but a lot of what I think pushed me to be a DI player was my teammates and my coaches,” Johnson said. “We always push each other and have fun and are competitive. I think that competitive drive is what you need.”

While most of her senior season remains ahead, Johnson said a galvanizing moment in her quest to become a top-end player came during her first year with the high school program.

“I rode the bench for section finals. We lost, but it was a really big, defining moment for where I wanted to be as a player, to end up on the same ice that they were,” Johnson said. “I was just dipping my feet in the water, getting a taste of what was to come the next four years.”

When she arrives at Jamestown, Johnson will find a familiar face behind the bench for the Jimmies. Amber Schaack ‒ who coached the girls JV team in Delano a few years ago, is a Jamestown native and is a former Miss North Dakota Hockey ‒ was named the first head coach in program history earlier this year as the school prepares to launch its women’s hockey program.

“I did look at other programs and talked to another school, but being comfortable is one of the biggest things for me. I want to be happy where I am,” said Johnson. “North Dakota, with a coach who I know and am comfortable with, is a good fit for me.”

Grace Glasrud, a 2020 DHS graduate, became the first girls hockey player to play Division I hockey. She is a goaltender for Post University in Connecticut. Lunderby said that now having two players at the top collegiate level, along with a handful of others who have played at the Division III level, should be a motivator for Delano girls.

“Hopefully it really excites the younger kids when they see someone like Ash, who puts in the extra work, time and effort,” he said. “It shows them that consistent effort pays off.”

Johnson, who also plays lacrosse for Delano High School in the spring, plans to major in nursing at Jamestown. She is the daughter of Gregg and Karen Johnson of Loretto.