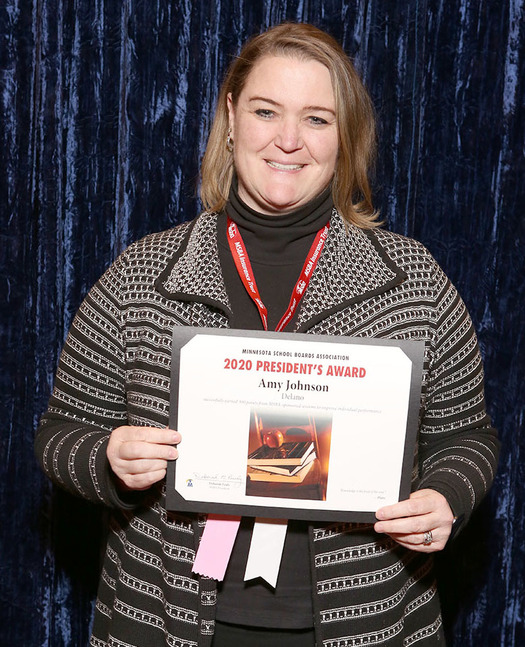 Earlier this year Delano School Board member Amy Johnson was honored for reaching a milestone in her career of public service.

Johnson received the President’s Award from the Minnesota School Boards Association during a recognition luncheon at the January MSBA Leadership Conference in Minneapolis. The award goes to board members who have attended 300 or more hours of MSBA training programs, and only 15 board from around the state qualified in 2020. In all, there are nearly 2,200 school board members in Minnesota.

“Study after study shows that a well-trained school board is more effective in raising student achievement,” MSBA Executive Director Kirk Schneidawind said. “These board members receiving the President’s Award show their dedication to making sure all of their students succeed.”

Johnson originally decided to run for the school board in 2008, was elected, and was sworn into office that December due to the resignation of another board member.

“When I decided to run for school board in 2008, it was driven by a strong desire to support the district’s mission statement of academic excellence,” Johnson said. “I always felt that it was my responsibility as a board member to educate myself on the varying issues impacting our students, staff and community in order to be an effective board member. MSBA has provided invaluable opportunities for me to attend trainings, as well as represent our community in creating the platform used to lobby the legislators on enacting legislation to best serve our district.”

In more than a decade on the board, Johnson said that two particular highlights have been implementing the strategic plan process and passing the bond for the campus building project in 2015.

“Both took many years and the involvement of staff and the community at large to bring to completion,” she said.

Challenges have included maintaining transparent communication with both district staff and community members regarding strategic goals and district operations.

“It’s hard to make sure everyone has the opportunity to voice their ideas and concerns in a constructive manner, and it’s equally hard to know that for every decision made there are those that love the decision and those that disagree,” said Johnson. “Being able to find the right compromise to meet the needs of the students and staff is always front of mind for me.”