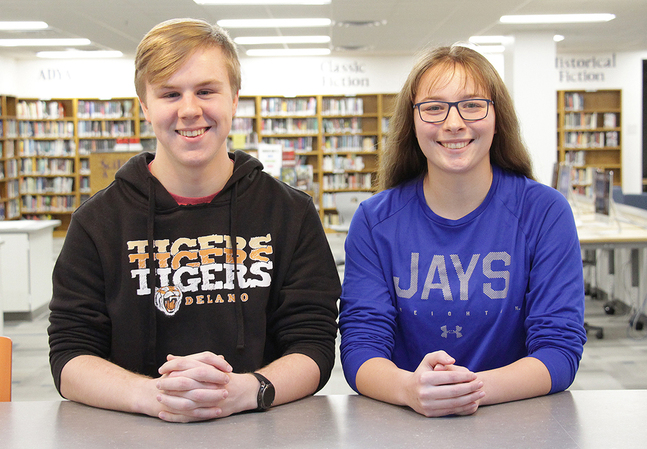 Amidst ongoing interference from COVID-19, students at Delano schools have continued to press on with their academic, athletic and artistic endeavors.

At the beginning of January two seniors, Marissa Huikko and John Lahlum, were recognized as Delano High School’s Triple A Award winners for high performance in all three areas. Although candidates have to fill out an application to be considered for the honor, both students said their actual selection to represent Delano at the regional level was unexpected.

“I was honestly surprised because there are so many qualified people at our school who could get it,” said Lahlum.

“There are many people who are qualified in our school because we do a really good job with the arts, academics and athletics, so it was kind of a shock,” agreed Huikko.

Both students said that managing time was vital to succeeding in all three areas.

“You have to pick your battles. You can only do so much in your day, so choosing where you focus your efforts is key,” said Lahlum.

Now closing in on the end of their Delano High School careers, both students said the school and community have served them well.

“The community is amazing. The teachers are awesome,” said Huikko. “They can tell if you’re struggling and if you need help. A lot of our teachers are our coaches as well, so it’s nice being able to connect with them in and out of school.”

Lahlum, who arrived in Delano as a freshman, shared some outside perspective.

“When I lived in North Dakota it was a really small town, kind of like Delano, but Delano has a really rich school program that offers many different types of classes and activities,” he said. “It gave me a lot of opportunities that I’m not sure many other students are able to have, so I’ve really enjoyed my time in Delano. It has really prepared me for the future.”

Marissa Huikko
Huikko has compiled a stratospheric weighted grade point average of 4.14 while taking some of the most challenging courses available to her, including numerous College in the Schools classes and an Advanced Placement course. She has taken high school math courses since seventh grade, and waded into college-level coursework as a sophomore. Her favorite subjects are math and science, and she also enjoys tutoring younger students.

“I really feel like our college classes here are preparing us for the future,” she said. “You can start taking them freshman year all the way through senior year. It’s kind of amazing to see how far you can get.”

DHS language arts teacher Jim VanCura, in a letter of recommendation for the award, wrote that Huikko “embodies the qualities expected from the Triple A recipient.”

“Marissa is diligent, meticulous and knowledgeable,” VanCura wrote. “She challenges herself with college-level courses and demonstrates the academic fortitude required from our leaders.”

In the arts, Huikko has been a percussion section leader in band all four years of high school, and has seized all possible opportunities to participate, including concert band, wind ensemble, jazz band and pep band.

“Band gives me the opportunity to take a break from the traditional classroom structure and learn while making music,” Huikko wrote in her Triple A application, adding that she has also pursued music outside of regular school hours in a school musical and at community functions.
“I feel that participating in band has given me some self-care skills and confidence to help boost my academic performance,” she wrote.

In terms of athletics, Huikko has been part of the basketball program throughout high school as a player or manager, and she has been a varsity softball player since her freshman year. She will serve as a captain on the softball team this spring, and also enjoys coaching youth players on a regular basis.

“The youth love when they are able to see older players teaching them instead of moms and dads,” Huikko wrote.

She added that connecting with underclassmen and making sure they feel like part of the team has been something she has particularly enjoyed in the athletic realm.

VanCura, who also served as Huikko’s varsity softball coach in past years, said she exemplifies energy, responsibility and sportsmanship on the softball field, and is a constant encourager of her teammates. Beyond the diamond, he pointed out that she is also the president of the Delano Best Buddies program, and volunteers with Special Olympics.

“She fosters a kindhearted spirit and advocates for others in her roles as a basketball and softball coach, umpire, a varsity basketball manager, a softball captain, and a Sunday school teacher,” VanCura wrote. “Marissa Huikko’s contributions are remarkable; she is one of the best role models we have at Delano and will represent the Triple A Award with dignity.”

Overall, Huikko said that her participation in academics, athletics and the arts have prepared her to succeed in a variety of ways. Sports instill the concepts of teamwork, responsibility and respect. Music also emphasizes teamwork among members of an ensemble, and is a rejuvenating activity. Academics have engendered an instinct for hard work and perseverance.

Asked what advice she would impact to younger students, Huikko emphasized the importance of variety.

“Find that balance where you can do all that you want, but you’re not overdoing yourself, and from there don’t be afraid to try something new,” she said. “You might be surprised at what you enjoy doing.”

Next fall Huikko plans to attend Creighton University in Omaha, Nebraska, with an intended major in biology. She is the daughter of Chad and Meredith Huikko of Delano.

John Lahlum
Any theater fan in Delano will recognize Lahlum’s name, as he has been a regular onstage in various high school productions for the past several years. But Lahlum’s resume includes much more than drama.

He carries a weighted grade point average of 4.07 despite a diverse and challenging course schedule that has given him more credits than the average high school student. Along with advanced College in the Schools and Advanced Placement offerings, he has also sought out fine arts classes and electives like public speaking, personal finance and language development.

DHS language arts teacher Meghan Gibas said Lahlum had an outstanding work ethic in her public speaking course, was an encouraging leader among his peers, and was a gifted speaker.

“A true testament to the influence he had on his peers was when another student in the class dedicated his final speech to John because of his positivity and encouragement,” Gibas wrote in a letter recommending Lahlum for the Triple A Award.

“These (various classes) have given me an enriched experience that will better prepare me for college and adult life,” Lahlum wrote in his Triple A application.

In the arts, Lahlum is active as a section leader in choir, and performed in the all-state choir as a sophomore. He is also a member of the select Sound Revolution vocal ensemble, and was a section leader in band as a freshman. Although he dropped concert band after ninth grade to open up more options in his schedule, he continues to play piano in the high school jazz band, and he is a member of the community band.

In addition to his participation in drama, Lahlum has also helped manage elementary and middle school productions and theater camps.

“Being on the stage or on the concert risers, I put my heart into each and every single performance, evaluate my work and improve, and help others to achieve their goals,” Lahlum wrote.

Before coming to Delano as a freshman, Lahlum was also an all-state performer in speech as an eighth-grader at Valley City, North Dakota, and finished fifth in the state. His eighth-grade robotics team also took first place in state and went to the world championship competition in 2018. He also participated in other academic pursuits like Science Olympiad and Math Team.

In the athletic realm Lahlum re-started his tennis career as a junior after two years off following his move to Delano. The break didn’t hinder his game much, if at all, and he was a regular contributor on the varsity roster.

Lahlum also serves as one of two student representatives to the Delano School Board.

Lahlum said he would encourage younger students to challenge themselves rather than taking an easier path.

“Push yourself. Take the classes that you think are just a little bit beyond you, because you might surprise yourself at the end of the day,” he said, adding that it is helpful to take a long view when encountering adversity. “The work that you do today pays off tomorrow.”

Overall, Lahlum said his school experiences have taught him how to cooperate with a wide variety of people, hone his own skills and widen his horizons.

“Being an active member of the social fine arts community, the tightly-knit athletics community, and the enriching advanced academics community, I feel that they have provided me with the necessary tools to be successful and reach for my goals,” Lahlum wrote. “Because of these experiences, I know how to display excellence, gratitude, and grit, and I hope to continue these traditions for the rest of my life.”

Next year Lahlum plans to attend Minnesota State University Moorhead to study entrepreneurship. He is the son of Steve and Rebecca Lahlum of Delano.

* Both students will now represent Delano at the regional level as candidates to advance for the state-level award.