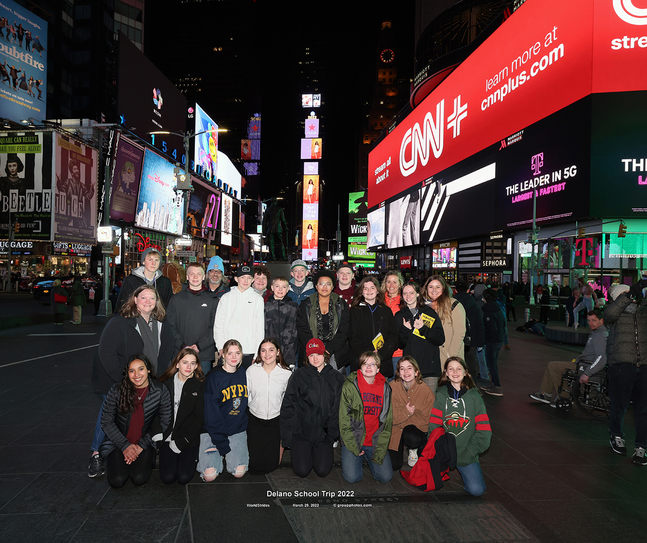 From the many monuments and museums of the nation’s capital to the hustle of Times Square, and from Mount Vernon to the Statue of Liberty, 18 Delano students immersed themselves in the attractions and history of Washington, D.C., and New York City this spring.

The trip, led by Delano teachers Ashley Johnson and Julie Longstreet along with two parent chaperones, encompassed the first half of spring break, from March 26-30. Students in grades 8-10 were included since the trip had been postponed from 2021 due to COVID.

“It was cool to see the different places history was made,” said sophomore Kyra Machakaire. “We visited the memorials and George Washington’s house. Influential people were there. History happened there. It’s just crazy to think about.”

Johnson said the trip benefits students in two major ways. First, it expands their horizons by giving them the experience of traveling great distances to meaningful places with their peers. And second, the five-day circuit serves as a crash course in history that brings to life the subjects they study in the classroom, and deepens their understanding of various people and events.

“They learn so much not only about history and the United States but also how the world works outside of school,” said Johnson. “It’s very eye-opening, I think, for the kids to get out of Delano and be in a big city with a lot of people. As far as history, kids who just finished studying Anne Frank go to the Holocaust Museum and further what they’ve learned in school, because our tour guides do a phenomenal job. To be at the memorials and museums and monuments helps the kids retain the information – it just resonates with them a little bit better.”

The Delano group flew to Washington, D.C., alighted at Reagan National Airport in the afternoon and immediately commenced an ambitious touring schedule via the World Strides organization. World Strides provided a tour guide, who directed the Delano group and a second group from a California elementary school through Georgetown. Exploring one end of the national mall, including the Korean, Vietnam and Lincoln memorials, capped the first half-day in town.

“A few of my relatives were on the Vietnam wall. I found their names,” said eighth-grader Daniel Johnson. “They have a website where you look up a name and it shows you what section it’s in and how many rows down it is.”

The next morning began with a tour of George Washington’s home at Mount Vernon, and the day continued with visits to the Smithsonian Museum, World War II Memorial, Washington Monument and more.

Watching the ceremonial changing of the guard at Arlington National Cemetery on the third morning of the trip left an impression on the students, who remarked on the solemn atmosphere, the symbolism in all aspects of the ceremony, and the precision of the soldiers.

“The one who was marching looked like a robot. His movements were so perfect,” said eighth-grader Blake Nemec.

The next stop was a sobering visit to the Holocaust Museum, where students viewed exhibits and videos that included personal stories from survivors. They also encountered artifacts, the most gripping of which included a gas chamber door and a pile of shoes taken from victims.

“I had to speed walk through there,” said eighth-grader Finn Pekuri. “Everybody was really silent when we left.”

Trips to the White House, Capitol Hill, the Martin Luther King Jr. Memorial and more followed in the afternoon.

“I got emotional because I stood exactly where Martin Luther King gave his ‘I Have a Dream’ speech,” said Machakaire.

After busing to Philadelphia for the night, the group arrived in New York on Tuesday, March 29. Time in Central Park, a subway ride and a stop at the Top of the Rock Observation Deck 70 stories high occupied the day.

“I didn’t realize how big New York really was,” said Machakaire. “I understood it was big, but driving in and seeing the skyline, it was huge.”

Nemec said Times Square was his favorite stop of the trip.

“Just seeing how busy and how much different it was, that was pretty cool,” he said.

“It was also cool to see the things that you see in pictures and videos, but it was the actual thing,” he said.

The group also came upon a scene where filming was taking place for the show “The Marvelous Mrs. Maisel.”

“It was a really big crowd,” said Pekuri.

The day ended with a trip to Broadway to see “The Lion King.”

“Broadway is so much fun,” said Ashley Johnson. “Even the boys – maybe they weren’t amped about going to see ‘Lion King,’ but at the intermission they were like, ‘This is amazing!’ There is a lot of listening about history during the trip, but there are a lot of other opportunities and experiences, too.”

The final day included a subway ride to Battery Park and a ferry ride to the Statue of Liberty, which students said was much smaller than they expected, before the flight home.

Though the schedule was grueling, students said the opportunity was one they would never pass up.

“We would wake up early in the morning and just keep going,” said Nemec.

“We were constantly moving,” agreed Pekuri. “We’d wake up at 6 a.m. and get back at 10 or 11 at night. I’m so happy we had a couple of days of spring break left after we got back. Even though it was my birthday the day after we got back I didn’t do anything. I was so tired.”

The experience has certainly given students a broader sense of their place in the world.

“It was really eye-opening, just to take everything in and learn about everything we saw,” said Nemec.

“It gave me a bigger view on how different places are compared to small-town Delano,” said Pekuri. “It changes how I think about certain things. After going to New York, my perspective on Minneapolis has changed. I used to think, ‘Wow, that’s a pretty big city.’ Now every time I go there I think it’s small.”

Ashley Johnson said the opportunity is one that students who just finished sixth and seventh grade can look forward to in 2024.

“It’s about learning outside of the classroom,” she said. “There is a lot about U.S. history that you don’t necessarily get in a textbook or a class, and it’s such a perfect age for them to go. It really is appropriate for what they’re learning in school. It’s not way over their heads, but it’s also not all stuff that’s easily known. It’s completely applicable to where they’re at, so it really is an amazing trip.”