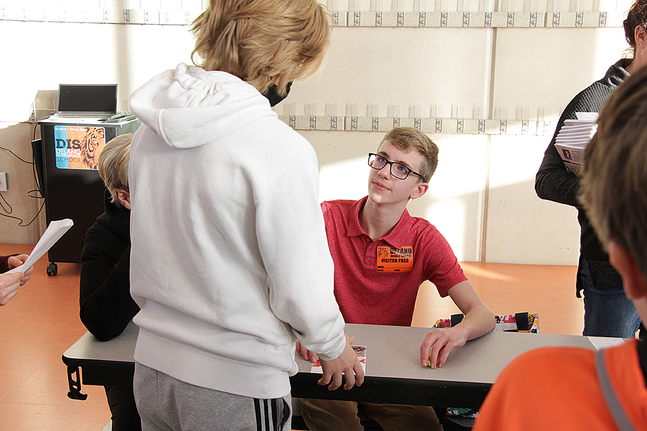 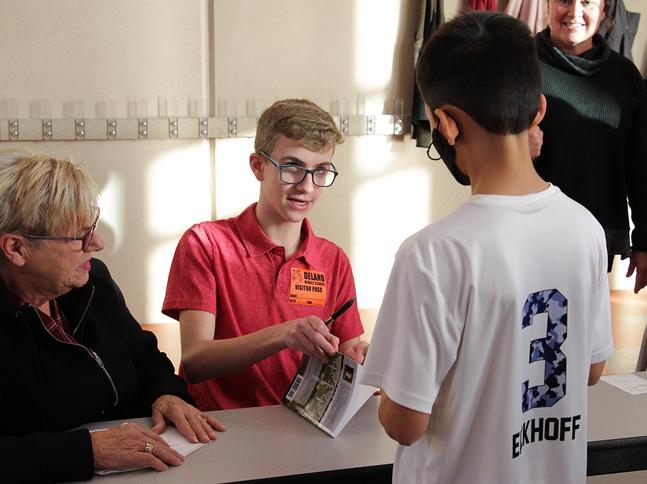 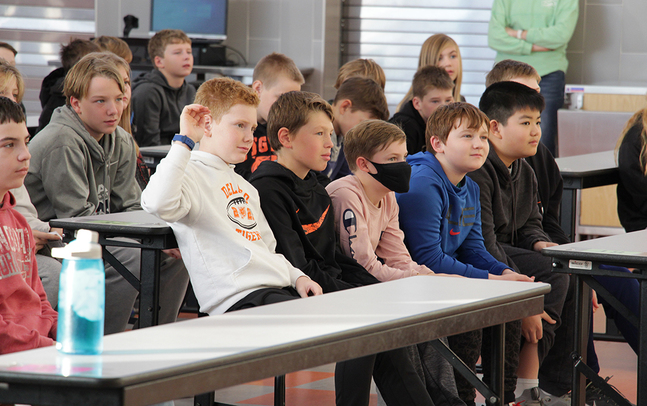 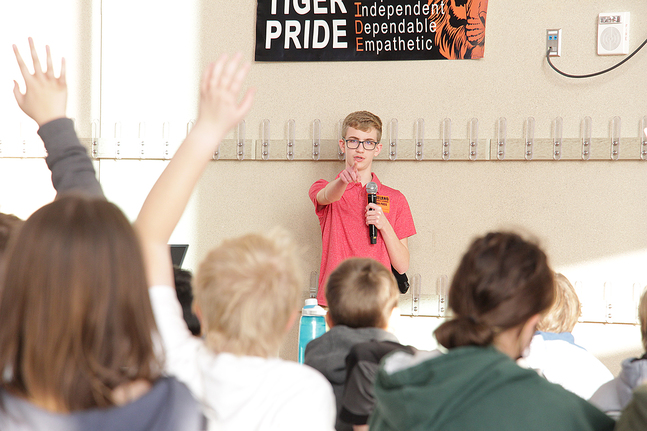 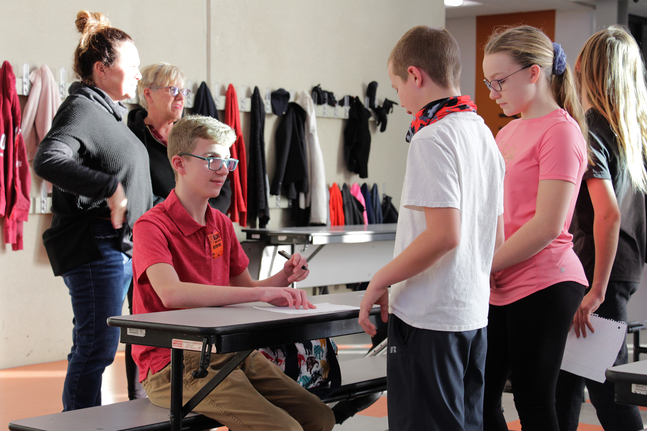 Sixth-graders engaged in learning about the writing process had a unique opportunity to hear from a youth author on Thursday, Dec. 2, when Ryan Massmann visited Delano Intermediate School.

DIS teacher Tammy Wermager introduced Massmann, a ninth-grade student from Albany, telling a grade-level assembly of students in the commons that she learned about Massmann and his work at the Book Nook in Delano.

Students listened to a presentation from Massmann about how he became an author, then had an opportunity to ask questions and have him sign their copies of his historical fiction novel.

The writing process
Delano students are currently learning about creative writing, story elements, plot lines, and other elements of writing, so the visit was well-timed.

“This is all about writing, how I started to write, and what I’m doing now,” Massmann told his audience at the beginning of his presentation, adding that reading is the first step to writing. “I’ve always loved reading, seeing someone’s story, or a fictional character’s story. I just think it’s amazing that you can immerse yourself in another world through reading.”

Massmann said he started writing seriously around fifth or sixth grade, and made two or three attempts to write a book before producing his current novel. The inspiration for his book came while he was playing “Battlefield 1,” a World War I video game.

“Like many of you, I enjoy playing video games,” he said during his presentation. “It gave me inspiration to look into these people’s stories. … It gave me an idea of what I wanted to write about.”

His book, “The Forgotten Struggle,” focuses on the war from the perspective of a German soldier, which Massmann said was a purposeful choice to emphasize the humanity of the soldiers on both sides and to share a fresh perspective.

“The hardest part was forming the characters in my mind,” he said. “You want them to be like real people, so I used writing as a vent for my own emotions and experiences.”

He started the 149-page story in sixth grade and finished it while he was in seventh grade, attempting to write about a paragraph per day while balancing, school, free time and his writing project.

“Multiple times I almost quit because I thought I couldn’t be good enough to write a book and actually have people read it,” he said, adding that the genre of historical fiction can be difficult because “it requires imagination, but you also have to be true to the time period.”

Worried about failure, Massmann didn’t even tell his parents about his project until the book was nearly finished. He wrote it on Google Docs and eventually shared it with friends to gather feedback and critiques.

Publishing
Once finished, Massmann said his parents agreed to help him explore the publishing process. After finding out that the publishing company would keep a percentage of the proceeds from book sales if he pursued the regular publishing option, Massmann opted to self-publish his book, which was cheaper and would allow him to keep all the proceeds.

Still, the process was not inexpensive or easy. Over the course of about four months a publishing company helped edit the work and create a book cover, and in the end Massmann said that publishing his book cost between $1,500 and $2,000, which his parents helped him to pay.

Massmann then began working to sell his book, attending events at places like the Book Nook to share his story. Those efforts have paid off. He has sold hundreds of copies, paid back his parents in full, and is now making a profit.

Next steps
Students asked if he would consider writing for a career.

“I just want to keep it as a hobby,” Massmann said. “If it became a job then it might become an inconvenience to write.”

Massmann is already writing a follow-up novel and aims to complete a trilogy in the future.

“Writing is a massive task,” he said, but added that his advice to new writers would be to not let fear of failure or of publishing cost deter them from trying.

• “The Forgotten Struggle” is currently available at the Book Nook or on Amazon.