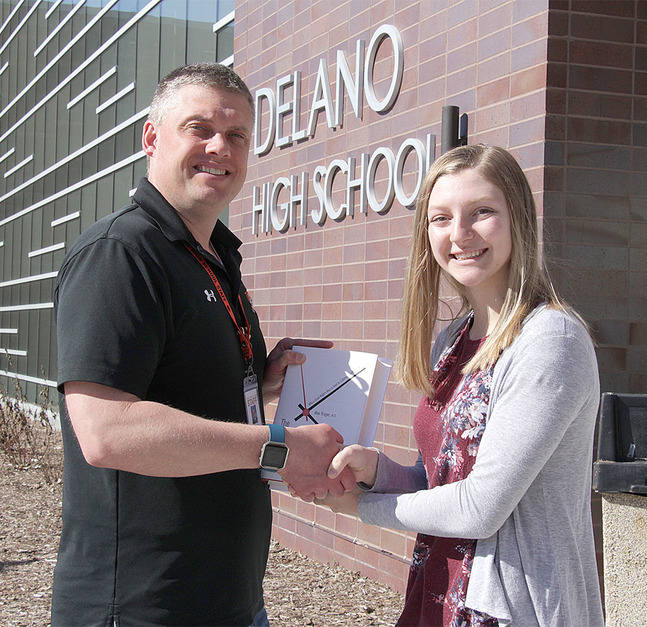 On the way to earning her rank at the top of the junior class at Delano High School, Jennifer Almquist has learned the importance of responsibility and time management.

“It’s really exciting,” said Almquist. “I don’t really know much about it, but I’m excited to learn more.”

The award is given by the Yale Alumni Association of the Northwest to students who exhibit “outstanding personal character and intellectual promise.”

“It is a big deal,” said Farbo. “Yale strives to touch base with students who are the high flyers of high schools. Students who are first in the class are exceptional across the board. They take classes that are challenging -- CIS classes, AP classes. They are in leadership roles. That’s just what comes with being first in the class, the expectation that you’re the cream of the crop.”

There is no scholarship or other financial benefit associated with the award, but Farbo said that recognition by “a college organization that is definitely elitist” is an accomplishment that should be celebrated. The Yale association reaches out to Farbo annually to choose a student from Delano who is worthy of the honor, and over about 20 years Farbo has consistently chosen the top student in the class for the reasons mentioned above.

This year’s book is “The mystery of sleep: Why a good night’s rest is vital to a better, healthier life,” written by Yale School of Medicine professor Meir Kryger.

The topic is fitting for a busy student who has more than just academics on her schedule. When asked how she has achieved such success in school, Almquist said her formula is simple.

“Work hard, but the main thing is definitely time management,” she said. “Without that things don’t go very well. I’m also in competitive dance with Star Seekers, so I have to get my homework done in school or right after school. I can’t wait until midnight.”

Almquist said her favorite subject in school is mathematics, and algebra in particular.

“I like solving problems and finding one answer that’s right,” she said. “The teachers have been good too. I had Mr. Shouts in ninth and 10th grade for math. They were really fun classes and made me love math.”

Another teacher who has made a difference for Almquist is chemistry instructor Karen Hohenstein.

“She is a great good teacher who really cares for her students and helps them achieve their goals,” said Almquist.

With another year of high school remaining before graduation, Almquist said she does not have any definite long-term plans. While she would like to pursue a major in math at a college yet to be determined, she doesn’t have an associated career in mind.

In the meantime, she will serve as the executive council treasurer for National Honor Society next year and compete on the Math Team while also continuing with her competitive dancing through Star Seekers.

Almquist is the daughter of Ken and Rhonda Almquist of Delano.